Rebecca undertakes work in a range of chambers specialisms, with a focus on public, administrative and local government law, housing and homelessness, and court of protection work.

Rebecca joined chambers in September 2018, after spending her first years of practice in the Government Legal Department as an employed barrister.

During her time at the employed bar, Rebecca worked closely with a number of Government Departments on a variety of high-profile issues, regularly writing and presenting submissions directly to Ministers, drafting Statutory Instruments and working on key pieces of legislation (including the draft Spaceflight Bill and the Cultural Property (Armed Conflicts) Act 2017).

While working for the Department for Business, Innovation and Skills, Rebecca led research into the potential impact on national sovereignty of the inclusion of Investor-State Dispute Settlement arbitration clauses in proposed multinational trade agreements such as the Transatlantic Trade and Investment Partnership (TTIP), a question set to be even more vital post-Brexit. During her time at the Ministry of Defence she was the legal lead on Visiting Forces issues (involving close and direct liaison with NATO and senior members of friendly military forces), as well as working on Northern Ireland legacy issues including the ongoing investigations into the events of Bloody Sunday and the activities of the Military Reaction Force, and dealing with the MoD’s involvement in the large backlog of Troubles-era inquests.

In addition, she was involved with much of the MoD’s most complex and challenging litigation, including those cases dealing with the applicability and limits of Human Rights law in conflict and conflict adjacent personal injury cases (such as the Snatch Landrover and Challenger tank personal injury litigation, and Iraqi Civilian Detainees claims). Rebecca also has experience working in the National Security and Counter Terrorism team on a wide variety of litigation either generated by or concerned with issues of national security. She continues to be instructed by central government as a Junior Junior on high profile litigation.

Rebecca studied Jurisprudence at St John’s College, Oxford, and undertook the BPTC at the University of Law. 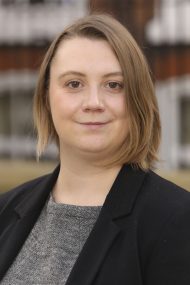